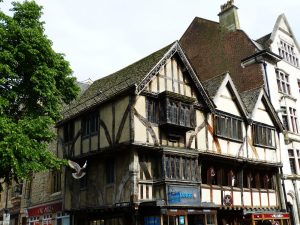 Oxford, England… a perfect example of British culture, a city that captures in a nutshell the bridge between the old and the new… an icon of universal education and society bettering… in reality, words fade when it comes to describing Oxford. However, I did ‘struggle’ to express the most essential aspects of why one should go study in Oxford, so let’s please enjoy them together in this blog ?

It’s really awesome. A perfect blend of Medieval, Victorian and Elizabethan architecture styles, the city’s architecture is pure gold for Architecture and Design aficionados. You will definitely lose yourself between historical eras just by walking the streets of Oxford, because it does have that… VIBE. However, you don’t have to be an Architecture PhD do see how marvellous the Urbanistic of Oxford is. You just have to FEEL ?

Indeed, that is the hot term describing the location of Oxford. Located less than 1h-drive away from London, Oxford is super close to all London’s major airports – Heathrow, Gatwick, Luton and Stansted. And by super close I mean couple hours away (depending on the crazy London traffic :D). Public transportation is pretty good too – local buses and trains are there to assist you get on and about ?

What is England’s ‘brain belt’? It’s an easier communication network that they are trying to build between the two major cities generating knowledge and innovation over the centuries – Oxford and Cambridge to ideally boost the country’s economy. Wouldn’t be to bad to be part of it, now would it? Making this happen is a big thing currently being discussed in UK, so why not witness it by being physically present there? ?

This bit right here is for the Harry Potter saga fanboys/girls! Why is that? Because not only did they draw inspiration from the city’s buildings’ designs when they created the Hogwarts Castle and its premises, but they actually shot couple scenes within the University of Oxford campus! Pretty cool, right? You will thus get the chance the walk the same path with Harry, Ron and Hermione and call yourself ‘Gryffindor’ while discovering the hidden gems of a truly marvellous city!

Last but not least, the city itself is a global symbol of prestigious education and research, hosting the aforementioned University of Oxford – the oldest university in the English-speaking world and the world’s second-oldest university in continuous operation (founded around 1096)! University of Oxford has graduated over the years some of the most notable, globally-recognised figures in the fields of science, politics, literature or drama such as Stephen Hakwing (R.I.P. gentle Sir!), Oscar Wilde, Bill Clinton, Tony Blair, Hugh Grant, David Cameron, J.R.R. Tolkien, Margaret Thatcher, Indira Gandhi, Theresa May, Kate Beckinsale, Rowan Atkinson, Emma Watson, Boris Johnson or Adam Smith!

But Oxford is not all about tradition and Conservatism. If you’re looking for a modern university campus, we’ve got you as well! Have a look at our upcoming online open day for Normandie Management School’s Master of Science in Banking, Finance and Fintech and prepare for a forward looking course!