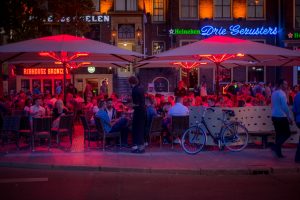 Nijmegen, Holland… not the most famous spot in The Netherlands, however a gem city to be discovered by the most adventurous of students! In this piece of work we’ve gathered the most important characteristics Nijmegen, a scenic Central Dutch settlement has to offer with regards to the life an international student could have if they chose it as their next study abroad destination. Let’s find them out together I would say, no?

You wouldn’t expect this from a relatively small with (with just over 150,000 inhabitants), right? Well, guess again! Nijmegen’s nightlife is ranked among the best in The Netherlands. While the city centre is packed with pubs and places to go wild at night, there is much more than that to Nijmegen. It is a vivid city where one can never get bored, as per the amount of socio-cultural events permanently taking place within it. I’m talking museums, street performances, etc.! Definitely not a bad to be studying abroad ?

The Netherlands has been ranked the 19th Safest Country in the World, and Nijmegen makes no exception. Crime rates are so low, they make Nijmegen the one of the safest student cities in Europe. It’s very green too! The Dutch Government, through the local authorities, is investing millions into making the country as green and sustainable as possible, so BIG UP for that!

Nijmegen as a settlement is as old as the time. First time attested as a city back in the Roman Empire era (when it had the name of ‘New Market’ or ‘Noviomagus’ in Latin), Nijmegen is a historically-rich city that has a lot to offer to history aficionados. The architecture isn’t bad either, so if you’re all about exploring old Dutch streets and buildings, Nijmegen is the place to go.

The city of Nijmegen is literally situated in the midpoint of The Netherlands. What does that mean? Well, since the country isn’t really that huge itself, you could be in any other Dutch within 1h 30mins by car! Also, let’s not exclude that being close to the German border, all other Western European countries are super easily accessible as well. Cheers to travelling and travellers ?

Last but not least, the level of education. It is pretty high. Nijmegen hosts one of the leading, most reputed Dutch universities, that is  – Radboud University. With outstanding results with regards to academia and research shown over the decades, it has proven as a top higher education institution training international students and turning them into global leaders in their industries.

Got your attention? Why don’t you check out their one of a kind Master’s in Economics? If you’re not about crunching numbers, you can also have a look at the other courses we are promoting for Radboud University!