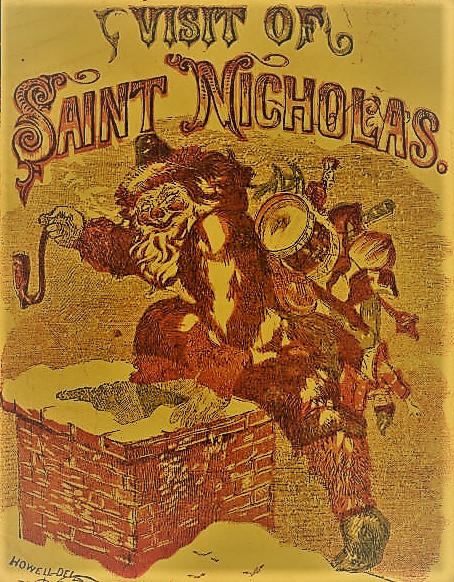 A man, a brand and your Christmas gifts

But do you really know who is Santa?

In a lot of countries, Saint Nicholas Day on the 6th o December is the most serious sign that Christmas is around the corner! But what is the connection between Saint Nicholas, Santa Claus and Christmas? We really want to find it out!

The beginning of the story

It is said, that Nicholas was a very kind and rich Greek Bishop, who lived in the 4th century in Myra, a region in Asia Minor – nowadays in the Southwest coast of Turkey. Nicholas was very known for his generosity and for secretly giving presents to poor people and children in need.

The patron of the students

Thanks to all the legends and stories about his big heart and very helping nature, he was made a Saint and got known as the “Wonderworker”. Although he is more famous for being the Saint of the children, Saint Nicholas is also the patron of the scholars and students in many countries in Europe. In Spain “San Nicolás” is the patron of the University of Valladolid, one of the two medieval universities of Spain.

Due to the Great Persecution of the Christians in the Roman Empire, Saint Nicholas was put in prison and died on the 6th of December, but the exact year remains unknown. His bones are now kept in Saint Nicholas Church in Bari as they were stolen from Turkey by some Italian merchants in the past.

In the 16th century, during the celebration of Christmas in northern Europe, the concept of giving presents to the children was transformed into “Father Christmas” or “Old Man Christmas” in the UK, “Pere Nöel” in France and “Christ Kind” in Germany. Later, the Dutch people took the faith about their beloved Saint Nicholas with them to the USA and they established the idea of “Sinterklaas”, our today΄s Santa Claus!

With the time, the UK “Father Christmas” and the USA “Santa Claus” came closer together and now the story says that Santa lives in the North Pole, in Finland. His home is in the city of Rovaniemi in Lapland, but you won’t find him there during the festive season since, as you know, he is travelling the sky sharing gifts all over the world!

You know who is still going to be in Finland though? The Study Abroad Portal organising Online Open Days with world class universities like the University of Oulu that is inviting you to join the interactive webinar about its Master´s Programme in Ecology and Genetics!

To accept your present for this December, save your place now:

Of course, The Study Abroad Portal organises Online Open Days with universities worldwide, so if you want to study abroad and do your Bachelor, your Master or your MBA in a new interesting country, don’t miss this great opportunity!

Now, you must have heard about the story that Coca Cola “designed” Santa Claus. Well, this definitely not true: Saint Nicholas worn his red robe long before Coca Cola successfully used him as its brand icon. During the Victorian times Saint Nicholas wore a variety of colours and in 1863, Harper’s Magazine, the second-oldest continuously published monthly magazine in the US, published an illustration of Santa Claus dressed up in Stars and Stripes! So yes, Coca Cola made Santa even more famous but there’s no way we can say that it constructed him.

So now that we know a bit more about our beloved Santa let’s get ready to start waiting for him even if we have been naughty this year 😉 !

All the best for a very happy and merry festive season,

Looking to Study Abroad? Check out our webinars with the most prestigious universities worldwide and get connected with your future!

You want to know more about Finland? Then, you need to read that: Both Innovative and Sustainable: The Perfect Balance