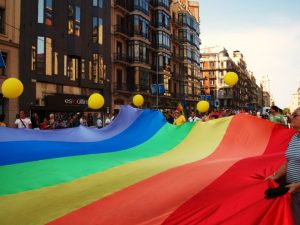 LGBT community, this blog is for you! Living a life of oppression caused by fear is probably not the best solution, right? Especially if you really are into travelling and considering studying abroad! So worry not anymore. You’ve come to the right place at the right time! Let’s get the party started with the top 5 gay-friendly student cities around the World – handpicked by The Study Abroad Portal!

The gay capital of Southern Europe, Barcelona is number one in the list. Everything is just perfect there for a gay student. From amazing education (great business schools such as EADA, reputed universities and colleges such as Universitat de Barcelona or Barcelona College of Chiropractic), tropical city vibe and a whole district in the city centre dedicated to gay activities (‘Gaixample’), being a LGBTQ community member and studying in Barcelona will be one of the most outstanding experiences in your life. WORD!

Amsterdam – the ‘Venice’ of the North is also a great choice when it comes to gay-friendly student cities. One of the first countries to legalise gay marriages, The Netherlands overall and implicitly Amsterdam is one liberal place with open visions towards human nature. Education is not bad either – University of Amsterdam, VU Amsterdam or Amsterdam University of Applied Sciences are amongst the big names on the Dutch international education.

Toronto is literally the definition of acceptance. An extremely safe city for an LGBT community member (Canada adopting full gay marriage rights more than 10 years ago), Toronto is the ideal place to have your study abroad experience. As if outstanding education wasn’t enough (Toronto hosting University of Toronto, York University, or Humber College), on top of that goes the cherry – Canada actually offers study scholarships to LGBT community members! Pretty cool, right? ?

Bet you didn’t see this one coming, did you? A Middle Eastern city among the best gay-friendly student cities on the Globe? Well, you read it right! Actually, the gay culture in Tel Aviv has been so prominent lately that the city has earned the title ‘the gay capital of the Middle East’. The combination between the Mediterranean laid-back atmosphere and the Tel Aviv University providing state of the art degrees make Tel Aviv a hotspot on the map for an awesome gay study abroad experience.

And a special shout-out in our blog is assigned to Montevideo! Why? Because Uruguay only recently legalised gay marriages, while showing a incrementally supportive attitude for the LGBT community. The Latin vibe of the city, alongside the subtropical, amazing weather will simply take your breath away. At the same time, Universidad de Montevideo and Universidad ORT Uruguay will be there to give you knowledge, so why not give it a try? ?

Hope you enjoyed our blog about the top 5 gay-friendly student cities around the world! As education doesn’t discriminate, we’ve got online open days for universities in many other place around Mother Earth – have a look here guys!