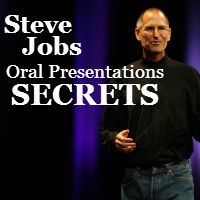 You’ve got to find what you love, going to bed at night saying I’ve done something wonderful. That’s what mattered – Steve Jobs

Steve Jobs was one of the most captivating communicator on the world stage. If you adopt just some of his techniques, your ideas and presentations will stand out in a sea of mediocrity.

As a communicator you can have the greatest idea in the world. But if you can’t convince the audience enough, it doesn’t matter at all.

a) Develop a messianic sense of purpose:  Jobs was inspired by a purpose beyond making money. True evangelist are driven by a messianic zeal to create new experiences and to change the world.  Some managers are uncomfortable by expressing emotion about their dreams, but it’s the passion and emotion that will attract and motivate others.

b) Plan in analog: The single most important thing you can do to dramatically improve your presentations is to have a story to tell before you work on your Power Point file. Truly great presenters like Steve Jobs visualize, plan and create ideas on papers or whiteboards well before they open the presentation software.

Design experts recommend that presenters spend the majority of their time thinking, sketching and scripting. A true presenter spends 90 hours creating an hour long presentation with 30 slides. But only one third of that time is spent building slides. Another third is rehearsing, but the first third is spent collecting idea, and sketching the story.

c) Introduce the antagonist: In every classic story, the hero fights the villain. The same storytelling principle applies to every Steve Jobs presentation. In 1984 when he introduced the Macintosh, big blue, IBM represented the villain. Introducing an antagonist (the problem) rallies the audience around the hero.

a) Eliminate clutter: A Steve Jobs presentation is strikingly simple, highly visual and completely devoid of bullet points. “Simplicity is the ultimate sophistication” – Steve Jobs. Also, try to not use bullet points. Bullet points are the least effective way to deliver important information according to a new research into cognitive functioning – How te brain retains information-.

Researchers have discovered that ideas are more likely to be remembered if they are presented as pictures instead of words or pictures paired with words.

“Challenge yourself to use fewer words and more visuals…”

b) Dress up numbers: Numbers don’t resonate with people until those numbers are placed into a context that people can understand. The best way to help them understand is to make those numbers relevant to something with which your audience is already familiar with. For example, when Steve Jobs introduced the Ipod in 2001, he said it came with a 5GB memory. He broke it down further by saying “You could carry 1,000 songs in your pocket”.

c) Reveal the amazing moment: Always remember that people will forget what you said or what you did, but they will never forget how you made them feel. Create an emotionally charged event ahead of time. Identify the one thing you want your audience to remember and to talk about long after your presentation is over.  Let’s return in January, 2008 when he introduced MacBook Air. Steve Jobs could have described it as most people would: “We’re really excited to introduce a really thin, light notebook,  bla…bla…bla”.

Instead, he created an experience…

b) Practice: Jobs rehearsed for many hours over many days. A Business Week reporter who profiled Steve Jobs wrote: “His sense of informality comes after grueling hours of practice”

…When was the last time you devoted hours of grueling practice to a presentation?

c) Wear the appropiate costume: Steve Jobs is the anti- Lady Gaga. Where Lady Gaga will change costumes 90 times in one show, Jobs had one costume that he wore in every presentation – a black mock, blue jeans and running shoes. Now, why he could get away with it? Because he was Steve Jobs. Seriously, when you invent revolutionary computers, music players and smart phones, your audience will give you permission to dress anyway you want.

Give it all in your next oral presentation and start creating and building your own personal brand! Always remember to have fun & Good luck!