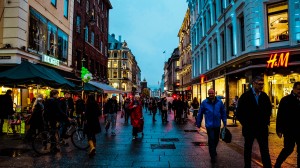 Have you ever thought of studying in a Norwegian institution? We have all heard about Norway, but what do we really know about this country? Norway and Sweden are the two countries in the Scandinavian Peninsula which, along with Denmark, Finland and Iceland shape the Northern European region known as Scandinavia.

The Kingdom of Norway, which is a unitary constitutional monarchy, shares a long eastern border with Sweden and is bordered by Finland and Russia to the north-east and the Skagerrak Strait to the south, with Denmark on the other side. The country also has an extensive coastline, facing the North Atlantic Ocean and the Barents Sea.

Norway provides students with infinite possibilities to succeed. As Norway has been voted the best country in the world to live, a student in Norway can relish on the Norwegian innovative and economic lifestyle. As English is their second language, there is no need to learn Norwegian and this ensures a smooth adaptation to Norwegian culture and lifestyle. Health and safety standards in Norway are very high and the crime rate is quite low.

Oslo, the capital of Norway, lies deep in the picturesque fjord with the same name. It is the oldest city among the Scandinavian capitals and has a population of approximately half of million of inhabitants, whom are known to be very friendly and hospitable people.The central part of Oslo is rather small and almost all the tourist attractions are within walking distance, but if you want to visit other parts this city is very convenient for travelling by public transport. You can save more if you buy a special pass for buses or subway.

The second largest Norwegian city is Bergen, widely known by its splendid moderate climate. Tourists are attracted not only by the climate and nature of this place, but also by the large number of sights and other cultural values. It also has the NHH Norwegian School of Economics, ranked among the top 50 business schools in Europe and known to be the leading center for research and education in economics and business administration in Norway.

The weather in Norway is quickly changeable all year round, so you have to take an umbrella with you when you plan to go for a long walk. Even in summer you should definitely take warm clothes with you because it can be pretty cool at night.