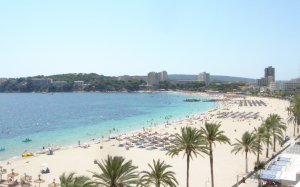 Ever longed about studying by the Mediterranean? You’re not the only one, believe me. And you’re entitled to feel that way, because that Eastern Spanish Coast is awesome on so many levels! However, in case you’re not 100% convinced, we’ve put together a list of 5 reasons to study abroad on the Eastern Spanish Coast, so let’s speak again after you’ve read them ?

The Eastern Spanish Coast, which lies from Costa Brava (Catalonia) until just below the City of Murcia, is considered to be one of the most beautiful areas in terms of beaches in the whole Spain. The fully Mediterranean look and scent of the Eastern Spanish Coast makes people fall in love at the first sight with the landscapes, which explains why a lot of expats live, work or come here on holidays. On top of that, the beaches in the area attract many foreigners who get to own houses for holidays, because the whole atmosphere is quite unique!

Everyone knows what about the infamous Paella is, right? Or at least it should be, because it comes from this area! It is the typical Eastern Spanish Coast Mediterranean food, with all its incredible varieties which would need a fortnight to talk about – seafood, rabbit, chicken, and even vegetables! However, Spaniards from the Coast eat much more than just Paella, foods amongst which I can list Iberian foods such as jamon serrano, queso Manchego, tapas, etc. This is the region growing the best oranges in Spain, while the olive oil is not so bad either. And let’s not forget about the wines – wines are pretty good here too.

Since the Middle Ages which marked the beginning of the Big Exploration period, Spain has always been a country open to the world. That is why Spaniards are some of the most open-minded people that will ever meet! Their Latin character makes them share their culture with foreigners, and thank God – there’s a lot to share! They are friendly and warm, so you’ll have a great time at the University (Spanish parties are WILD!). They are definitely friends for life.

If we were to summarise the weather in this area of Spain, we could only use one word (without being accused of false modesty), and that is – PERFECT! It is so good, that basically more than half of all Spanish agriculture is carried out here. In other words, the Eastern Spanish Coast not only feeds all of Spain, but a lot of products grown here go for export.

The quality of education

Last, but not least, the ULTIMATE argument we’ve got on our legendary list is the quality of education. Especially in the fields of Tourism, Hospitality, Culture and Patrimony Management and pretty much everything that is related to those. Spain relies a great deal on tourism as a main economic branch, so you will make a good choice if you choose to study abroad on the Eastern Spanish Coast ?.

Pretty good arguments, right? We knew we would convince you! Now you’re probably wondering what’s next. Don’t worry, we’ve got you – registrations are now open to participate in the webinar that we’ve got for Universidad Catolica de Murcia presenting their Hospitality Management Master’s! Check it out here!

Interested in studying in Spain, but other topics though? Have a look at our Study in Spain list of available webinars and let your Mediterranean study abroad dream start TODAY!